Visitors to the Dodge corporate exhibit at the 2011 Las Vegas SEMA show were treated to a very mean-looking Challenger wearing slick 1320 graphics. Adorned in vibrant fluorescent yellow paint with plenty of matte black panels and staggered fat and skinny rolling stock, the Challenger 1320 Concept car was a none-too-subtle hint that Dodge product planners were – and are – hip to the fact plenty of Challenger owners – and future owners – are just as interested in straight line racing as they are road course work.

And that’s an important distinction. You see, while the hottest Mustang GT350 and Camaro ZL1 models fixate on setting lap speed and lateral G records on far away race tracks with difficult to pronounce names, they pay minimal attention to the type of racing that got us all into the muscle car thing in the first place: drag racing down the 1320! Though some less-informed detractors call drag racing a skill-less sport, the fact is, drag racing is the one form of automotive competition that doesn’t require a special course and expensive support systems. Anyplace there’s a long, straight patch of pavement with two lanes, you have a drag strip (no street racing folks, please. Our safety and your license depend on it).

So while most Mustang and Camaro (and Challenger) performance development emphasizes cornering and braking prowess, little of that potential can truly be experienced in daily driving without harsh consequences. As a result, most drivers only access 30 to 40 percent of what their cars are capable of delivering. But with a car that’s been optimized for straight line sprinting, well, that’s a car that can be enjoyed more often on a daily basis, isn’t it? Enter the Challenger 1320 Concept.

The product of Craig Buoncompagno’s (aka “Craig B”) Mopar® Underground skunk works team (FCA’s in-house show car factory), the Challenger 1320 Concept initiated the vision of a street- and strip-capable Challenger packing plenty of straight line punch – while still retaining the world-class handling and braking skills of its SX, GT, R/T and SRT® siblings.

After drooling at it from outside its roped-off 2011 SEMA display, we caught up with the Challenger 1320 Concept at the 2012 Woodward Dream Cruise in Michigan, then again in 2014 at the LX Fest in southern California, where a few subtle changes were noted. Here’s a review of the car responsible for getting the “green light” for today’s 2019 Challenger Scat Pack 1320. 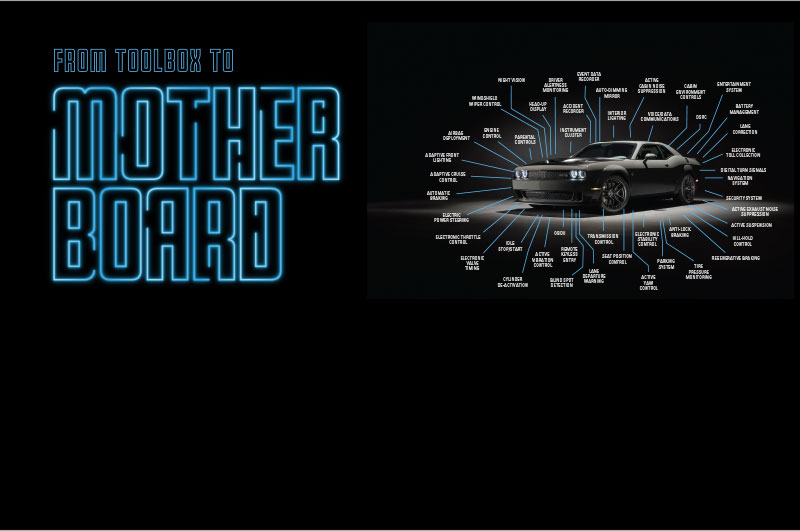 From Toolbox To Mother Board

Long Term Relationships: The One That Didn’t Get Away – Chapter 3