“It was definitely a Six Flags roller coaster adventure of a weekend. I can say going to the semis has done a lot for our team. We qualified No. 1, which was definitely no fluke, and we found two ways to win in the first two rounds, and that’s one small leap for the Mopar®/U.S. Army team. We’ll take this and we’ll not really lick our wounds too much because we found a lot of progress. Yes, we wanted to defend our race win here from last year and it stings that we didn’t but, within minutes of coming back and debriefing after the semifinals, we found the cohesiveness of this team is very strong and will carry us a long way the rest of this season.”

“Interestingly enough, it’s the first time since deep into last year where we probably didn’t have one of the best cars on the property, yet we still left with the third most points of anyone this weekend. These are the kinds of outings that will win the championship; when you can overachieve relative to your performance, because trust me, these guys will have this thing figured out and we’ll be thundering again in Charlotte, where we’re right back to a four-wide format. It’s a good time of year to be a Funny Car driver and we leave with the points lead.”

“It was a little tricky track with new asphalt out there, just a lot of variables to deal with. We had six great runs up to that point and it just wore too much clutch and pulled the tires loose out there. A lot of times, it just loops the tires and I can drive through it, but it just blew them off pretty hard and there was no real recovery. When you’ve got a guy like Wilkerson running 97 beside you and you have identical lights basically, it’s kind of tough to make it up. That’s Houston for us. I got my first win here so it’s kind of a special place for me but we’re moving on. We have Four-Wide (Charlotte) coming up and trying to get focused on that because it’s a whole different ballgame again, like Vegas was. I don’t have the greatest record at Four-Wides, so I need to focus and do well. Hopefully, we’ll get back out here. We need to start winning soon.”

“The conditions out here are so tricky and today was a perfect example of ‘wrong place at the wrong time.’ We made a nice run, fifth quickest of the round, but came up short. That’s part of the luck in racing sometimes. We have a really good racecar, we went down the track when a lot of them didn’t, so we’re not going to change anything. We’ll just go on to the next one, keep doing what we’re doing and it’ll come to us.”

“We really put ourselves in a hole during qualifying, but you’ve heard me brag about (crew chief Rahn) Tobler and our team time and time again. No matter where we qualify, I think we have a fighting chance, and I wouldn’t want to be the guy or gal in the other lane racing our NAPA car on Sunday morning. Having Hagan first round was not the plan, especially as good as they’ve been running this weekend, but we went up there and were out in front of them initially. Then the car quit at about 650-feet, and we’re working to figure out why.”

“Big picture, we’re tied for the points lead and that’s a good thing. Most importantly, we have a really good U.S. Army car. This morning, when the conditions were cool, I thought nobody was going to beat us here. It got quite a bit hotter than we thought and, still, we were ultra close. The good thing is we go right from here to another one. It wasn’t like we got beat in the first round. We held our own, we got good points this weekend, separated from a lot of people in the standings. It’s all good.” 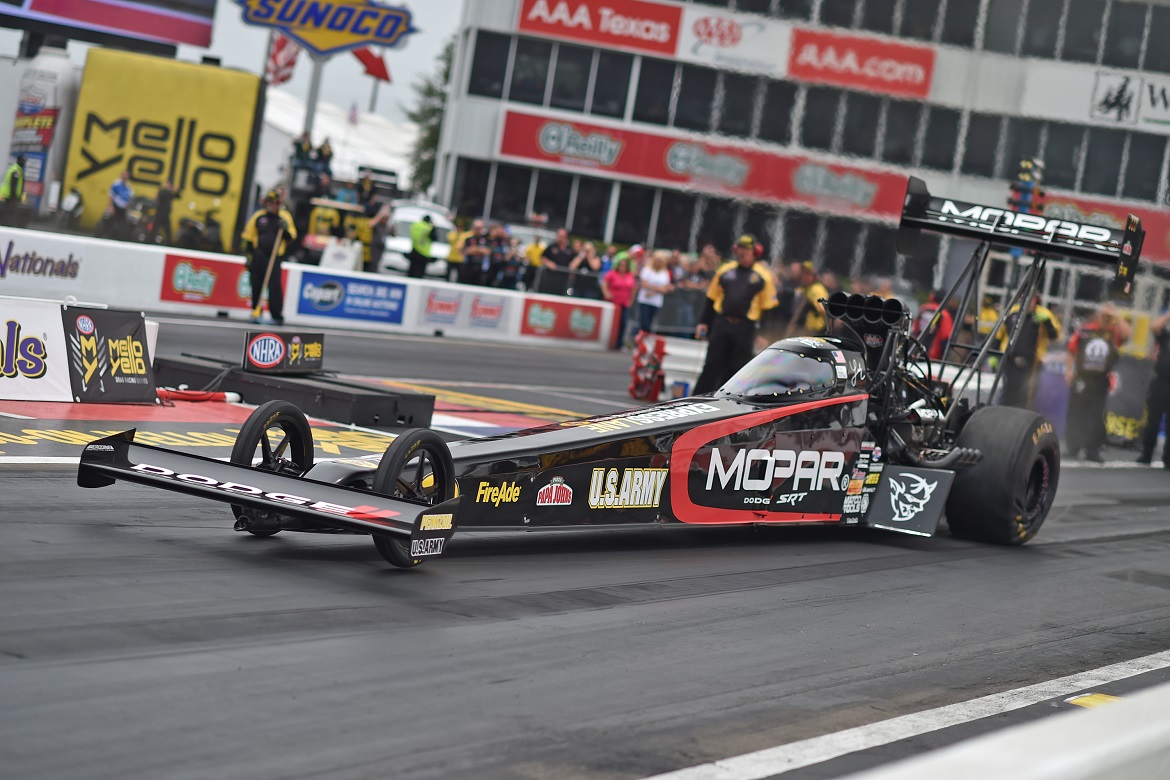