Leah Pritchett buzzed her “Angry Bee” Mopar Dodge 1320 Top Fuel dragster all the way to the No. 2 starting position heading into elimination rounds on Sunday at the 2019 Dodge Mile-High NHRA Nationals Presented by Pennzoil at Bandimere Speedway near Denver.

Pritchett, No. 1 qualifier last year at Denver, came oh-so-close to repeating that feat during an impressive qualifying outing in which steadily improved her performance in each session. Pritchett collected two bonus points on Friday and added another pair for being second-quickest inQ3 on Saturday with a 3.816-second elapsed time at 318.77 mph.

The defending Top Fuel champ at Denver, Pritchett banked six bonus points in qualifying and will draw Terry Totten in round one as she attempts to take her “Angry Bee” to a second consecutive win on “Thunder Mountain.”

Tommy Johnson Jr. was quickest of a pack of six Mopar Dodge Charger SRT Hellcat drivers to make the Sunday field at Bandimere Speedway. The event is marking the 31st year with FCA fca support, the longest continuous running sponsorship in NHRA and one of the longest in all of motorsports.

Johnson moved his DSR Make-A-Wish Dodge Charger SRT Hellcat Funny Car up seven spots in his first qualifying shot on Saturday, rising from No. 13 to the sixth spot. In the final qualifying session, Johnson recorded his quickest run of the weekend at 3.978/317.72 to lock down the No. 2 position and earn two bonus points. A two-time runner-up at Bandimere Speedway, Johnson will look to capture his first Denver win starting with an opening-round date with Jeff Diehl.

Two-time Funny Car WorldChampion Cruz Pedregon soared to the provisional No. 1 spot in his Mopar-powered Snap-On Dodge Charger SRT Hellcat Funny Car on Friday evening thanks to a pass of 4.002 seconds at317.42 mph. Pedregon maintained his spot after the first qualifying session onSaturday, but was shuffled down the ladder during the final session and denied his shot to reclaim the pole after more rain showers prevented Cruz and three other drivers from making their final qualifying passes. He will start third onSunday.

That same fate befell NAPA Dodge ChargerSRT Hellcat driver Ron Capps. Second quickest in Funny Car on Friday on the strength of a 4.005/316.97 pass, Capps struggled in Q3 and was hoping to move back up the ladder in Q4 until rain washed away any chances of a No. 1 spot. for the No. 4 spot and will meet Todd Simpson in round one

Sporting brand-new graphics with his2020 Dodge Charger SRT Hellcat Widebody Funny Car, Matt Hagan jumped from No. 8after the first day of qualifying up to the fifth position with a run of 4.054/283.07 in Saturday’s first session. Hagan struggled in Q4 and wrapped up qualifying in the seventh slot. Winner at the most recent NHRA event in New Hampshire, Hagan will face DSR teammate Jack Beckman in the opening round as he seeks back-to-back wins, and his first ever on “Thunder Mountain.”

No. 14 after Friday’s two sessions, Beckman climbed the qualifying charts to put his Infinite HeroFoundation Dodge Charger SRT Hellcat in the tenth spot. JimCampbell will race his Charger SRT Hellcat from the No. 12 spot and meet Bob Tasca III in round one. 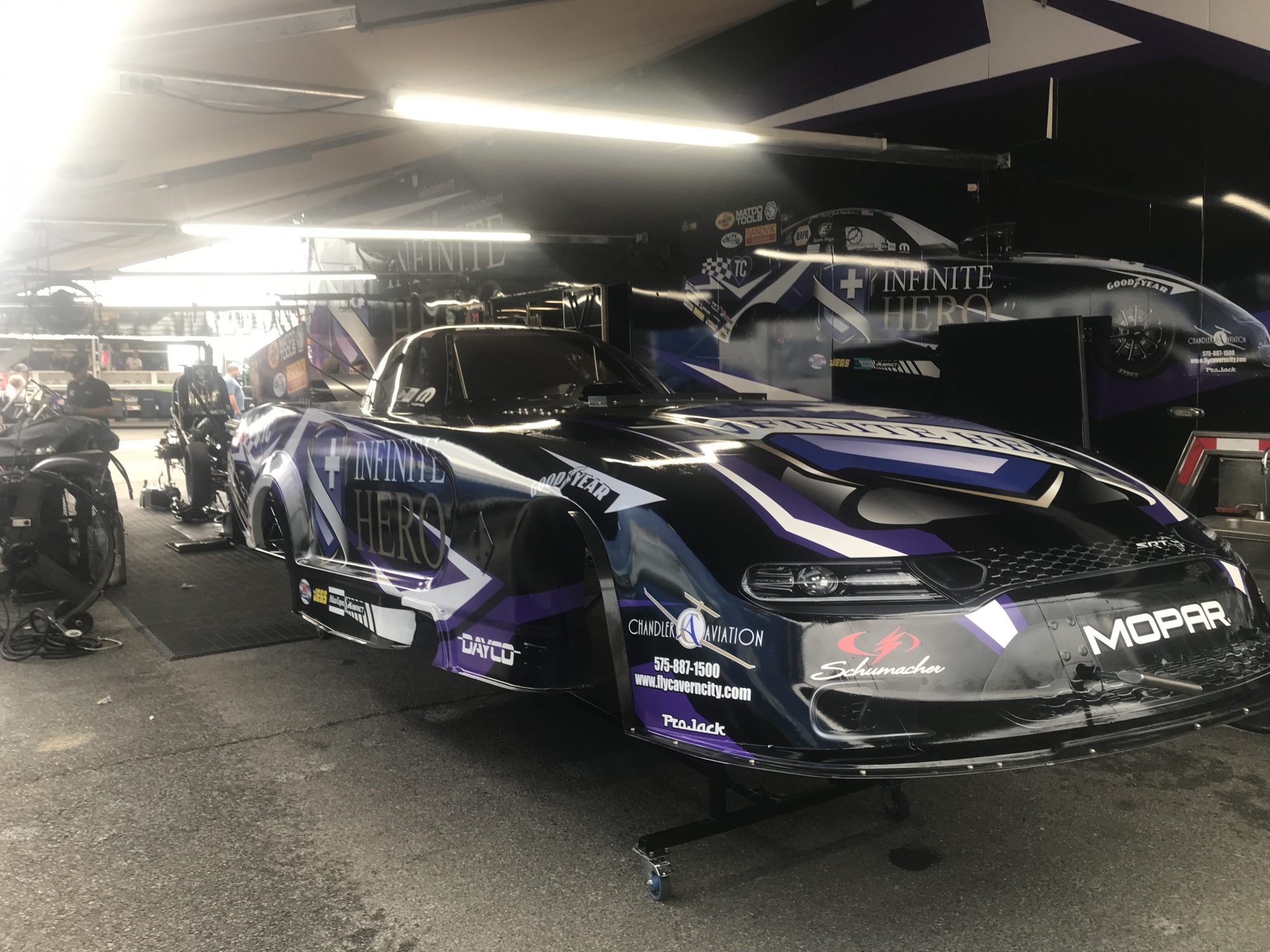 Behind the Scenes with Jack Beckman’s Team

Behind the scenes with carmen electra and Jim dunn racing